If you honestly counted up the hours of each workday that were truly productive, the final tally may surprise you.

In fact, a number of studies have shown that 9-to-5ers log less than three hours of productivity for each 8-hour working day.

1. Tend to life to minimize distractions

Let’s face it, life doesn’t come to a screeching halt when you enter the office so dealing with personal issues at work is inevitable, and perfectly understandable.

Schools, doctors, groceries and auto shops all seem to have the same working hours as you do so make room in your day, without guilt, to tend to what you need to do.

This gives you peace of mind to turn around and be more efficient with work you need to do in the office.

That little device in your hand is both a lifesaver and time killer all rolled into one.

Smartphones make it all too easy to jump down distracting rabbit holes, like texting and checking social media, throughout the day and killing your workplace productivity.

If you really want to make your smartphone smart, download an app called AntiSocial, which measures a number of things, including how often you check your phone, how much time you spend on social media, and more.

The resulting numbers are eye-opening, to say the least.

So you can begin to cut down on distractions in the workplace.

3. Prioritize your mornings for key tasks

Workplace mornings are an ideal time to catch up on what you need to do, from responding to emails to reading articles for research.

Most workplace action doesn’t ramp up until mid-morning, and by the time the afternoon rolls around, you’ll be putting out fires and scrambling to get things done.

4. Pick up the phone to thoroughly discuss the issues

Instead of using the phone to message your colleague or boss, why not use it for what it was originally designed for, a phone call?

When people communicate digitally, they lose a lot in translation, especially when entire thoughts are shrunk down into a string of letters.

Miscommunication through e-mail and text is one of the biggest culprits behind lost time at work, often costing people hours of time as they head off in the wrong direction.

A simple phone call can clarify, or confirm, instructions in an instant.

Study after study has come to the same conclusion when it comes to multi-tasking: not only is it unproductive, it can kill productivity entirely.

Instead of being the jack of all trades on many different tasks, be the master of one.

By focusing on one project at a time, you will actually speed up, and improve productivity at work.

6. Track the time spent on each task

When we take on projects with more ambitious goals and lots of unknowns, it is common to dig deep into the problem and lose track of time.

This is especially common when doing background research for projects and you end up spending hours looking for key insights online.

Instead of diving head first into the rabbit hole, it is more practical and more productive to keep track and limit the time you plan to spend on it.

This way, you reduce the chance to losing track of time and end up empty-handed at the end of the work day.

If you find you’re stuck or stalled on a work project, step away from it for a little bit.

Trying to force creativity never works and you only end up wasting your time with nothing to show for it.

If you’re just not feeling it, go on to something else for a little while, or take a break and go for a walk to clear your head.

By putting some distance between you and the project, you can come back to it with fresh eyes and a new perspective which usually lead to a small increase in workplace productivity.

8. Measure your tasks against the end goal

If you’re involved in a specific project, write down the end game on a Post-It note and stick it on your screen.

Every time you embark on something you may think is related to the task, measure it up against the final goal to determine its relevance.

You might be surprised how often we can get distracted by minutiae that have little to do with what we ultimately want to accomplish.

9. Delegate, and really delegate to free yourself to work on the big picture

When it’s all hands on deck, trust that you’ve got capable hands and delegate.

All too often, workplace productivity comes to a grinding halt when people bottleneck operations because they insist on micro-managing every aspect of a project.

When you delegate, trust that the work will get done, which leaves you time to concentrate on the big picture.

Surround yourself with capable people who love nothing more than to be given ownership of a job, no matter how small.

10. Be transparent and try to overcommunicate

More productivity is lost to operations that compartmentalize their workers and leave them in the dark, forcing them to guess at what would be the best approach, which means sometimes getting it wrong, through no fault of their own.

If you’re in a leadership position, share all the information and create stakeholders out of everyone on the team.

Overcommunication is especially important if you work with remote teams to reduce confusion and ambiguity.

With real transparency, everyone has a clear idea about how to move forward and contribute.

To be sure, you can make a distinction between transparency and an invitation for input.

Regular meetings deliver myriad benefits when it comes to transparency, progress, idea generation, and so much more.

That is, regular meetings that don’t hijack an entire day.

EZCast Pro’s split screen feature allows up to four presentations to display on the same screen simultaneously, making it easy for benchmarking charts and diagrams side by side.

Notetaking is made more efficient through EZNote, another native function inside EZCast Pro app.

Apart from taking realtime screenshots of presentations and annotations, EZNote integrates with Dropbox and Google Drive to make remote collaboration even better.

This way, every meeting has a clear purpose and effective follow ups.

While it may be almost impossible to make every minute of every hour at work productive, there are a number of small steps you can take that will have a big impact on your workplace productivity, and your overall performance.

One thought on “11 Strategies to Improve Workplace Productivity7 min read” 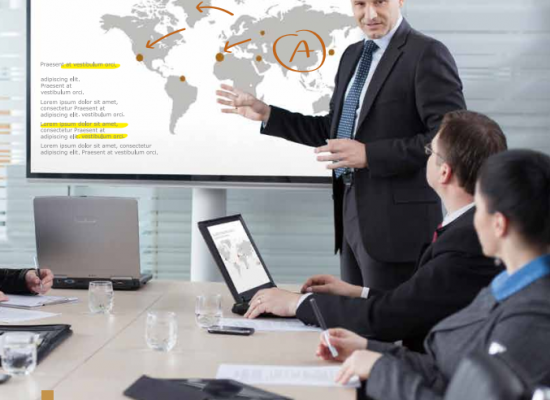